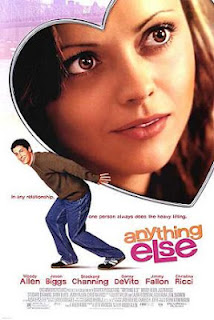 New York. Jerry Falk is a young comedy writer who broke up with his girlfriend to be with Amanda, whom he met while she was also still in a relationship. A year later, Amanda is inexplicably distant towards him. Jerry meets a veteran Jewish writer, the cynical Dobel, and asks advice from him. After months of avoiding sex with him, Jerry finds out Amanda is having an affair, so he takes Dobel's advice and cuts all ties with his life - including refusing to renew his contract with agent Harvey - and goes to L.A.

In his 'slump phase' in the 2000s - before he would regain critical acclaim with his two films "Match Point" and "Vicky Christina Barcelona" - Woody Allen's relationship comedy "Anything Else" got the most unjustifiably bad reputation, amounting to only an average grade of 5.2/10 on the critic's site Roten-Tomatoes.com, when it is actually one of his better contributions from that decade, a pleasantly fresh and well written film. Taking notice from the frequent complaints of the critics that he is too old to play the leading love interest in his newer stories, Allen took the supporting role of the resigned mentor Dobel and gave the main spot to Jason Biggs, even adding some modern, untypical elements into his repertoire (Amanda as the type of girl who can only get aroused by having an affair) but always staying true to his style, fulfilling the expectations with a few brilliant comical lines ("Who cares about Dostoevsky when Amanda is sleeping with that guy?"; "I will send him a Christmas present, as soon as I learn how to make a letter-bomb.") and even giving a few examples of wisdom about life ("Since the beginning of time people have been frightened and unhappy, and they're scared of death, and they're scared of getting old, and there's always been priests around, and shamans, and now shrinks, to tell 'em, "Look, I know you're frightened, but I can help you. Of course, it is going to cost you a few bucks..." But they *can't* help you, Falk, because life is what it is"). The biggest problem is that the movie takes too long - almost 40 minutes - until it finally ignites, which leaves only the second half truly satisfying, and some of Allen's constant obsessions with Nazi jokes really are an overkill, yet the cast is fantastic - especially the always fine Christina Ricci and Danny DeVito - whereas Allen gives one of the most unbelievable performances in a rare sequences of rage where he snaps and goes on to take a revenge on a car, in an extroverted episode that we never thought he could be capable off.