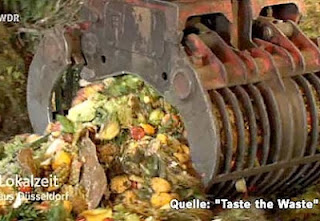 A French grocery store has a policy of throwing away food six days before their expiration date. Japanese companies have special fish products that last only hours, after which they are removed from the market and thrown away. A farmer has to remove potatoes that are "too small" or "too big" in order to obey the EU food directives, which again means that a lot of his crops will be wasted. According to the documentary, about 90 million tons of food are wasted annually in the EU this way. However, some people try to mitigate this disaster: some companies crumble old breads in order to at least use them as fuel for their ovens; Yokohama gathers wasted food and uses it as food for animals whereas an Italian entrepreneur collects unused food and then makes meals which are freely distributed to people.

This is a documentary many viewers always wished someone would have made: Valentin Thurn's "Taste the Waste" tackles the "taboo" subject of all the unused food that is shamefully wasted and just thrown away, in a day and age when a billion people were starving worldwide. By filming the practises in Europe and Japan, it shows the rarely seen "behind the scenes" images of vegetables, fruit, bread and meat that were not sold and are thus thrown as garbage, with the expressions of the people who do such a dirty job revealing much more than a thousand words (in one memorable moment, a woman from Cameroon openly says that it is such a shame that she has to trash so many tomatoes when people in her homeland are hungry). As with most of documentaries about society, this one also helps raise the awareness by making people think about some issues they never really payed attention to, while even offering some examples of solution (food with a passed expiration date is used to feed the animals in Yokohama), whereas it is quite interesting how the authors sneakily criticize the dumbed down, rigid EU regulations (a German farmer is happy when people come to his field and take the "inappropriate" potatoes which are not allowed to be sold because they do not meet the criteria from the EU). The movie is a little bit overlong towards the end by presenting too many people who do not contribute that much to the theme, yet as a whole it is a film to think about.