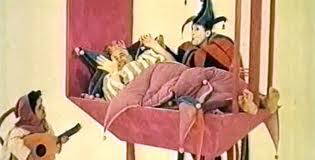 In the kingdom of Puritania, one man is sentenced for having a dream of a naked woman, and the woman with him. However, they manage to survive by promising to create special new clothes for the spoiled king, Goradonozor "The Only One". The man and the woman do not create anything, but pretend that the clothes are not visible only to stupid and incompetent people. In order to avoid that category, every noble pretends that the king is not naked, while the only one who had to courage to say otherwise, the court jester, is executed.

The first feature length film directed by the acclaimed director Ante Babaja, and the first Croatian feature length film in color, "The Emperor's New Clothes" took the eponymous fairytale by Hans Christian Andersen and transformed it into a political allegory on totalitarianism and cult of personality, in which nobody dares to say anything against the king, no matter what stupidity he does, which gives it at least some greater meaning behind an endlessly overstretched story that would have suited a short film far better than a running time of 63 minutes. Its second unique feature is the highly unusual, experimental mise-en-scene with *no* backgrounds, placing the entire story - people and their furniture - inside only a monochromatic white surface, which gives it a stylistic touch. A few satirical touches are also stimulative (the court jester is put on trial for having a dream about the king's invisible clothes and "not waking up"; the line "you could almost sense the king's muscles under the clothes") though the forced symbolism and numerous useless plot points inserted just to fill in the gap between the main story somehow bother here and there.