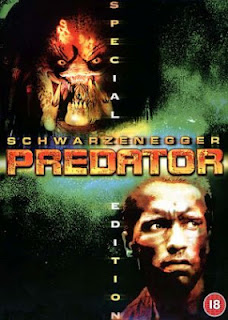 A US paramilitary unit led by Dutch goes to a Latin American country to rescue a group of hostages, including apparently a Minister, whose helicopter was shot down while "accidentally crossing into that territory". The team finds and destroys a camp of guerrillas, but Dutch then finds out the hostages were actually CIA agents. On their way back, however, they are hunted and killed by an unknown humanoid alien whose transparent suit makes him practically invisible. Covering himself with mud, Dutch becomes "invisible" to alien's thermal sensors, eventually killing it.

Thanks to John McTiernan's tight, competent directing and a crystal clear cinematography that enhanced the mood at some moments, the simplistic B-movie script for "Predator" turned into a much better product than it could have been, an occasionally genuinely suspenseful thriller. Similarly like Carpenter's "The Thing", even here the story drains most of its suspense from a hidden alien that covertly eliminates the protagonists one by one in a sealed off location, but just like the aforementioned film, even here the characters are underdeveloped and drop dead like flies: except for Billy, a Native American tracker, everyone else is practically an extra who needs to be eliminated just to pave the way for the final duel between Scharzenegger and the Predator - which is, albeit, truly remarkable for almost going on for 20 minutes without any dialogues. The movie takes too little time to put an emotional development, or even to create any philosophical context from the alien encounter, which is why after a time is starts to seem like a monotone and standard 'jungle chase' after a while. Still, the Predator's introduction is stimulative (at first, it just shows his POV, a thermal vision that sees every human illuminated in red, so that the viewers cannot be sure if it is just some man watching the heroes, until it reaches for a scorpion on a table, showing his claws on his hand, definitely establishing its alien origin), a couple of action sequences are fine whereas this restructuring of the "Alien" concept still seems engaging.