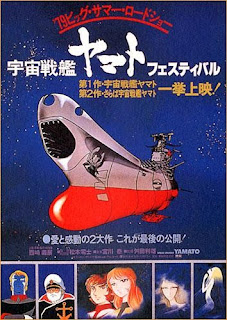 In 2190, the Gamilians, an alien race, establish a military base on Pluto and start bombarding Earth with radioactive meteors from it. Their goal is to depopulate Earth in order to migrate there, since their planet, Gamilus, is slowly getting destroyed by geologic activity. In 2199, people, who live underground, convert the sunk Japanese battleship Yamato into a spaceship and send a crew, led by captain Okita, to the 148,000 light years away planet Iscandar, where Starsha promised to give them a radioactive purifier. The Yamato crew destroys Gamilus' capital, meet Starsha - whose planet is also dying, but she accepts that - and return to Earth, thus saving it by cleansing it from the radioactivity.

One of the legendary animes of the 20th century that established a triple landmark—Leiji Matsumoto as a famous author; science-fiction as a popular and 'serious' genre; first anime fan clubs in the West—"Space Battleship Yamato" is today slightly dated in its animation, 'trippy' music and defunct knowledge of astronomy (i.e. it shows that there are living beings even on Pluto!), yet far more surprising is to find out that it is still fresh and undated on so many other levels, especially in some timeless themes about loyalty, honor and integrity. In this universe, the imperial Japanese battleship Yamato can be 'rehabilitated' by turning it into a spaceship that will save Earth, whereas the whole story is a gigantic cosmic re-telling of Japan during World War II (even the alien race, the Gamilians, look both 'familiar' and 'foreign' at the same time—just like the Americans—since they are identical to humans, except for their blue skin), except that here Japan is the good guy and its (space) bombardment is unjustified. Despite some epic, spectacular scenes and details that were surprising (i.e. the red robot Analyzer reminds a lot of R2D2), "Yamato" does not reach the same level of awe as Matsumoto's "Queen Millennia", yet it still has enough excitement. Most of its magic comes from Matsumoto's passionate fascination with space.

The meticulous sequence where Gamilians fire a missile from their military base on Pluto (!) and send it heading towards Japan, so the Yamato crew has only five minutes to take off from Earth before it hits them, reaches almost Hitchcockian intensity of suspense, emphasized through the radar showing the missile coming ever closer. In another sequence that has to be seen, Gamilian soldiers use three satellites orbiting Pluto to "bounce off" their laser beam across the planet and hit the sunk Yamato, situated on the "blind spot" of their base. In excellent episode 13, there is a retrospect that shows how hero Kodai turned from a pacifist to a star fleet soldier when a Gamilian radioactive meteor fell into Mount Fuji and caused a volcanic eruption, with the mushroom cloud explosion near his home acting as an analogy to Hiroshima. Matsumoto even uses subtitles and detailed space maps in order to transmit his rich imagination to the viewers, including a map of planet Gamilus, situated 148,000 light years away from the Milky Way, in the Magellanic Clouds. The storyline works fine and it is good that the authors animation trademark—too huge jaws—was limited only to the wacky doctor, but from episode 14 onwards too many filler episodes show up to patch up the empty-lax middle part of "Yamato", since nothing much can happen once the title ship leaves the Galaxy and travels to Gamilus. Likewise, despite two episodes where his compassionate side is shown, Desler remained a black and white villain in the disappointing last three episodes that fizzled off into simplistic action, whereas his relationship with Starsha was not explained properly, including some major plot holes (for instance, if Desler wants to prevent Starsha from giving humans her radioactive purifier, why doesn't he simply kidnap her?). However, "Yamato" still stands as a strong anti-war cult anime.

The first film isn't particularly great for essentially being a abridged and re-edited re-telling of the original TV series itself (with some new animation in at least one or two places to change the plot slightly). The second film would be one I enjoyed greatly and wished it stayed that way, but the fandom to Yamato was too strong for them producers to let it go quickly.

Haven't seen the film yet, just the show, but from what I have heard it was basically what you said yourself - just a summary of the 26 episodes in 130 minutes.