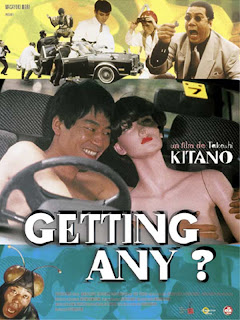 Asao wants to have sex. So he buys a car to attract girls, yet it turns out they are still not interested in him. So he buys a convertible, yet with no progress either. In order to buy a real car, he decides to go work in an weapons manufacturer so that he can rob a bank. However, even when he gets a pistol from a dead yakuza, he still is completely incompetent and cannot rob a bank. Figuring he might as well find girls among flight attendants, he boards a cheap airplane where he kills a yakuza named Joe and takes his identity. Alas, he gets in the middle of two rival yakuza gangs fighting over supremacy. Finally, two scientists recruit him for an experiment and turn him invisible, yet he uses that only for voyeurism. In a failed experiment, he turns into a Fly-man and is squashed.

After four serious films in a row, ex-comedian Takeshi Kitano returned to his roots and directed a pure, insane Marx brothers style slapstick comedy, "Getting Any?", which seems to be aligned towards a feature length "Simpsons" or "Family Guy" episode: it starts out with one premise (one guy wants to attract girls) and then wonders away - again and again - into completely different directions. Kitano seems to have a broad sense humor, encompassing several puns, spoofs and references to numerous films, shows and celebrities, from "Ghostbusters" up to "The Fly"; from Stalin to Kurosawa; from "Lemon Popsicle" to "Zatoichi" (a movie, as a footnote, which he himself directed a decade later!), and even though this 'patchwork' is not for everyone, especially towards the increasingly stupid ending, those who can just simply relax and have a good time will be entertained by the movie, since even dumb jokes somehow manage to ignite a good laugh (a car transporting 20 people (!), among them several on the roof and in the trunk; Asao wants to rob a bank, but he enters one where two bank robbers - much more "serious" looking than him - are already looting the place, so he just quietly exits the same way he entered). Actually, the movie is so crammed with completely absurd scenes and a dazed tone, similarly catching the same "wave length" as the cult grotesque "Wild Zero", that some moments will be laugh-out-loud funny even though they are not supposed to be (such as the entirely demented sequence where Asao is the guest of the yakuza and - instead of just simply hiring a striptease girl - the overweight yakuza boss gives him a welcome by sync singing a woman's song and dancing half-naked in a negligee), whereas it also gives a satirical commentary on the far-raching consequences of mass asexuality and hermit-women that appeared in modern times.