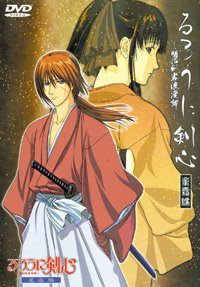 Japan, 19th century. Former assassin Kenshin Himura is now wiser and regrets his immature past when he killed unknown people for money. Thus, he wants to at least somehow compensate his misdeeds towards the world by helping people overseas. He wanders for 15 years, which leaves a toll to his devoted wife Kaoru who waits for him, while their son Kenji resents this kind of absence. Two of Kenshin's former adversaries kidnapped Kaoru in order to lure him into a trap, but he nullified their plans by rejecting to fight. Even after catching leprosy, Kaoru still loves him and sleeps with him. Finally returning home, Kenshin dies on Kaoru's lap.

Can too much humor be considered a flaw for a comedy? Can too much suspense be considered a flaw for a thriller? Following that principle, can we really blame a drama for being too sad or too emotional in its representation of a story? Each viewer must settle that out with himself/herself before watching "Samurai X: Reflection", the ending of the famed saga that turned into a real tragedy, without any humor or break for the viewers from the torn protagonists, which divided the fans into a camp that loves it and into another (which includes the author, Nobuhiro Watsuki!) that considers it too depressing and 'out-of-character'. In this edition, the story takes a huge twist on the hitman/ assassin genre, showing how Kenshin is haunted by all the victims he killed, which makes him unable to lead a normal, happy life, and thus much closer to fragile hitman in "Leon" than invincible 'killing-machines' in "No Country for Old Men" and co. His "X" shaped scar on his cheeck serves both as a symbol for physical and emotional scars, healing only when he does good deeds that slightly reedem him.

Redressing the victim-aggressor balance, showing how sometimes violence can have a traumatic effect even on perpetrators - and even decades after they have done it - "Reflections" is a circled out, fine and sure achievement, though indeed slightly too melodramatic-pathetic at times: one of the few emotional situations that turned out "just right", neither too cold nor too sappy, but simply touchingly sophisticated, is a quiet moment where Kaoru is sitting on a bed and thinking how she envies Kenshin's late wife Tomoe because "at least he thinks about her all the time", which is more than she can be sure for herself. Kaoru is an excellent character, so in love with the anguished protagonist, so devoted to ease his pain, that she even has sex with him while he is infected with leprosy, insisting that she wants to share pain with him no matter what - that is one of the most bizarre, unusual and yes, romantic moments in the history of anime. Nothing compares to that. Despite some confusing flashback segments, despite a too monotone tone of constant sadness, "Reflection" tells an honest story that is tragic from the start until the finish: as some have already pointed out, when someone kills hundreds of people, he cannot expect to live happily ever after. As much as the ending is frowned upon, it is the only realistic one. It is a real ending.