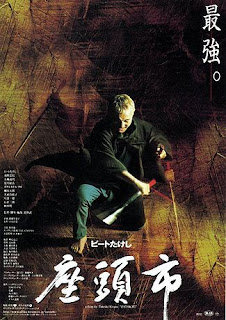 Medieval Japan. Blind masseur Zatoichi arrives in a small town and settles at a house of a nice lady. The town is terrorized by a gangster group that collects money every month. Zatoichi meets the coiled Shinkichi and two Geishas, Okina and Osei (who is actually a man!), who wants to take revenge on the gangster leader Ginzou who killed their father Naruto. Zatoichi turns out to be a surprisingly skilful sword-fighter and starts pursuing justice by fighting the gangsters. In a duel with Ginzou's best bodyguard, Zatoichi wins and kills them both. And it turns out he may actually see after all.

The good old story about a mysterious stranger who arrives at a small town and cleans it from villains was told a thousand times and became a cliche with time, but in the interpretation of director-actor Takeshi 'Beat' Kitano precisely that story turned out surprisingly fresh, vital, intriguing and accessible. Most of the vitality arrives from the humorous touch, like in the exposition where the title hero is sitting on a meadow while a bad guy wants to attack him, yet when he reaches for his sword he accidentally wounds his colleague or when the gags are revolving on the expense of the male Geisha. "Zatoichi" is an unusual film whose static tone isn't disrupted even by ultra-short dynamic scenes of blood shedding whereas despite a whole queue of flaws (overlong running time, a messy structure, a few character development deficiencies...) it is difficult to wrestle off the hermetic charm of the movie as a whole.