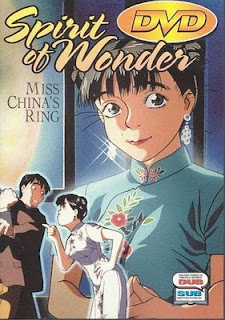 Miss China, a young Chinese girl, runs a boarding house in Prince of Wales. She often has to argue with the eccentric tenant, Dr. Breckenridge, because he can't pay his rent regularly due to problems with selling his inventions. But she has pity on him because she is hopelessly in love with his young assistant Jim. When he gives her two presents for her birthday - a ring and a giant text saying "Happy Birthday to China" stamped all over the Moon - she starts believing in their invention. In order to make "the best ring" for her, they destroy the Moon and from there on its debris makes a ring over Earth while China and Jim become a couple.

This short anime OVA film is a tender, gentle and honest homage to "soft steam-punk" genre with a surprisingly good sense for romance: it draws the most awe from the the excellent character of Miss China who is yearning for her hidden crush, tenant Jim, as well as crystal clear cinematography, sharp animation and an occasional comic moment (in one scene, Dr. Breckendridge reads the newspaper, and on the back page you can clearly spot a few headlines saying "Strawberry Fields Forever" and "Sgt. Pepper's Lonely Hearts Club Band"!). The tender mood runs smoothly and keeps the viewers warm (Miss China arguably gets the best birthday present ever) until the nonsensical finale: it is simply too outlandish for comfort, featuring an idea with a potentially catastrophic consequences for Earth, yet the characters treat it so superficially, as if it is all a joke and a game. Such an excessive idea somehow outweighs the well developed romance up until that, though "Spirit of Wonder" is still a quality anime, just not so much as that all-time anime classic of romance "Maison Ikkoku".

At least you enjoyed it. I found it quite enjoyable myself as well (if not for the one or two scenes of Breckenridge groping China anyway, a lot more of that fan service occurs in t e original manga anyway so whatever). It's hard to find this nowadays as the DVD release that came out stateside went out-of-print very quickly, featuring a pretty decent English language version of the film performed by some pretty good actors I felt. That dub was also released back in '04 for a collector's edition of all the Spirit of Wonder OVA's that were produced (including a later one based around another story from the original manga).