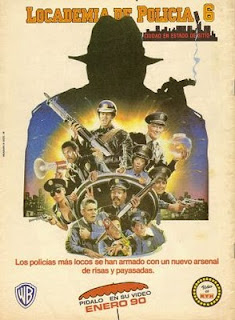 A crime wave hits the city. Police officers Callahan, Hightower, Jones, Tackleberry, Hooks and Nick desperately try to arrest the gang of three thugs, but to no avail. It seems that someone from the police precinct is secretly giving information to the gang, which is led by a mysterious mastermind. Captain Harris and his lackey Proctor just make the situation worse with their clumsy shtick. However, the officers finally arrest the gang and reveal the identity of the mastermind, who turns out to be the mayor.

As the critics established, every new "Police Academy" movie was worse than its forerunner, except maybe part 6 which is, compared to the bad previous sequel, surprisingly tolerable and OK, which is the first and last time that the authors actually decided to improve something in the series instead of just sinking deeper into the abyss. That doesn't mean that "City Under Siege" is anything more than barely a watchable flick, though, with bland jokes, sparse ideas and lackluster crafting throughout, whereas the shtick of Captain Harris and his assistant Proctor already turned lame two movies ago. The best ingredient is actually the mystery behind the identity of the secret mastermind who hides behind a shadowy silhouette, which gives the story some interest a la Sherlock Holmes, whereas the cinematography is very good. Everything else is not even worth mentioning - Nick Lassard is no Mahoney, though Callahan has a neat moment when she single-handedly beats up a gang of thugs on the street and Hightower has a comical duel with the equally strong "wrestler" gangster.