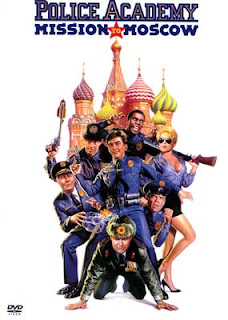 Some Police Academy staff - Commander Lassard, Captain Harris, Callahan, Tackleberry, Jones and cadet Kyle Connors - are summoned to Moscow to help jail the evasive criminal Konali, whose aim is to create a new video game that will hack into computer systems worldwide. Despite numerous complications, they manage to apprehend Konali and get awarded.

Following the trend that every new "Police Academy" sequel was worse then the previous, part 7 resulted in an inevitable disaster. In the 5 year pause following the weak box office results in part 6, the writers and producer Paul Maslansky did not manage to improve the humor or the skill of the increasingly decaying cheap concept and return it to the level that gained fans in the first place. Featuring only the remains of the remains of the original cast (and their charm), "Mission to Moscow" turned into such a bland, naive and underdeveloped comedy that no joke is even worth mentioning. Actually, there is almost nothing to see in this film, it is one empty hole. The faithful five actors from the original series bravely stayed on the sinking ship, yet not much was achieved to mitigate the pale story. Since this time it was even a commercial failure, as much as it was a critical, "Moscow" once again showed that the "Police Academy" series should have ended four movies ago.