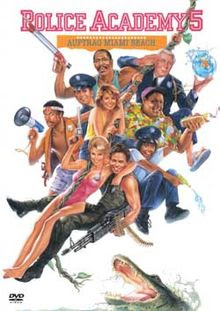 Commandant Lassard is about to be retired, but not before he will be honored as the "police officer of the decade" in Miami. He flies there with officers Hightower, Jones, Tackleberry, Callahan, Thomas "House" and Hooks, where he meets his nephew again, Nick Lassard. Captain Harris and his lackey Proctor also travel there to participate. When Lassard gets kidnapped because he accidentally switched his handbag with that of the criminal Tony, who hid his stolen jewels there, the officers intervene and save the day.

The script for part 5 of the low-brow comedy series "Police Academy" was so thin and bellow standard that it definitely caused the crash of the franchise and a massive exodus of the original actors from previous four movies, including the main protagonist Mahoney and the comic duo Sweetchuck and Zed, without whom this didn't have any more sense - their absence is sorely and obviously missed. The remaining few original "Police Academy" actors who were brave enough to stay on a sinking ship did their best, but to no avail. The first 15 minutes of "Assignment Miami Beach", that play out in the Police Academy headquarters, are okay, but once the rump crew arrives at Miami there is almost nothing more to see. Part 5 is an empty, thin and bland comedy, though the sequence where Hooks switches her "nice" voice with a threatening one at a training and scares a dozen volunteers who pretended to be an angry riot so much that they back off until the end of a pool, wherein they fall into the water, and Callahan's singing "Ride of the Valkyries", are unexpected small crumbs of delight.