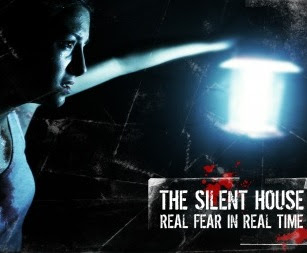 Lara and her father Wilson arrive at an isolated, abandoned house in the middle of the forest one evening. The owner, Nestor, wants to sell it, so Lara and Wilson's task is to clean the place next morning. Just as the two of them were about to go to sleep, she hears noises upstairs. Her father goes to investigate and is found dead. Lara realizes all the doors are locked. When a hand reaches for her from the dark, she finds a key and escapes from the house. Nestor arrives and they get back in. She kills him and disappears.

6,000 $ were enough for director Gustavo Hernandez to film "The Silent House", a horror film shot in only one take - actually, two, since there was a cut roughly an hour into the film when the lights went off in the library room and the whole screen went blank for a minute, but it is gladly forgiven because it enabled a genius moment of inspiring suspense when Lara makes a photo with a flash camera, and for a split second the viewers see a ghostly person illuminated on the other side of the room. Making a horror film in only one take is an inventive, but difficult idea to pull through since the director's options are limited (no time for make up changes; inserting a chilling scene falls out; pacing and location constraints...), but he tackled all the obstacles and achieved a genuinely scary, frightening and intelligent 'haunted house' flick - once the suspense starts some 15 minutes into the film, the viewers are so absorbed that they don't even think for a minute that they are watching an Uruguayan, but a universal film. Maria Salazar is great in the leading role, performing some 100 moves in the film without a mistake, though it would be a sin not to mention the virtuoso camera work that not only pays attention about the lighting and the reflections in the mirrors, but also performs a great trick of running after the heroine from the house into the forest, then into a car and then back into the house again. Complaints could and should be raised towards a rather "scarce" story and a confusing ending, yet as a whole the film is a worthy 'recomposition' of Hitchcock's "Rope".