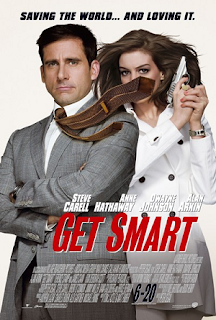 After the evil organization KAOS attacks agents of the US intelligence agency KONTROL and destroys its headquarters, clumsy analyst Maxwell Smart is promoted by his Chief into an agent. He joins his forces with a skillful woman, agent 99, as they travel to Moscow and discover that KONTROL mastermind Siegfried bought nuclear weapons and intends to ransom the president into giving him money or he will use it on the US soil. Due to a mistake, Maxwell is accused of being a double spy. However, he prevents an assassination attempt on the president and discovers the bomb. After Siegfried insults his henchman, he throws his boss from the bridge.

The movie adaptation of the 60s TV comedy show with the same title, "Get Smart" is a surprisingly pleasant surprise which has its fair share of sizzling humor: besides having a very 'modern' look and feel to it, it is fast, dynamic and flows smoothly, offering a few neat surprises, whereas Steve Carell is excellent in the leading role. Truth be told, Peter Segal's film has at least six examples of 'garbage humor', other jokes are more tolerable though also occasionally blatant whereas the finale is rather tiresome, which doesn't make the film really smart, yet when the jokes are good, they sate a comedy fan. The awkward exchange between Maxwell and "remote" Agent 13 (Bill Murray), who, after the communications were destroyed, was put in a tree, is quietly hilarious; James Caan creates an amusing George W. Bush parody; KONTROL's gadget inventors Bruce and Lloyd steal almost every scene they are in, especially the one where Maxwell is accused of being a double agent and wants to get pass them, so they simulate a fake "fist fight" with him in front of the surveillance camera, whereas a special treat is also the original way the main bad guy (Terence Stamp) gets eliminated at the end - you didn't see that coming. Anne Hathaway's comic talent is slightly underused by the authors, but she still managed to deliver a worthy performance. All in all, if the minor flaws are ignored, a satisfying and funny comedy adaptation of the shrill original.