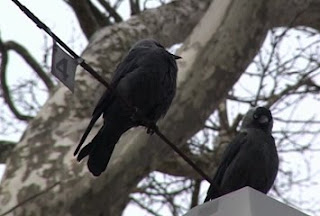 Director Goran Devic and his film crew visited the town of Sisak to interview people about the supposed "crow pandemic". Almost everyone in town is against those birds: some say the late Norbert Weber, who founded the local ironworks, imported crows from Siberia to get rid of some plant parasites, but his black flying friends managed to spread throughout. Some lady even believes the crows are actually those "Hitchcock's crows", lamenting how the birds "hide in bushes and then pluck your hand until they dismember your flesh". That never happened to her, "but to her mother". One of the most bizarre things that was captured on film is that some guy from the Mountain Rescue Service is actually assigned to knock out and destroy the crows' nests from trees using a long pole.

Devic's first film is, by his own words, so full of mistakes and holes that you can poke it like cheese, but precisely such charming imperfection makes this short documentary so accessible and easily watchable, as if it was made from the people for the people. Devic himself said: "A good film has 100 flaws, a bad film only one, it's not good". A lot of humor originates from the interviews where people say such insane things they immediately mock themselves with such backward attitude. For instance, one madam, a member of HDZ, is saying how she is helping commemorate Palm Sunday, which "celebrates peace", and in the same sentence she adds nonsense, how "those crows should all be exterminated". Even though "Imported Crows" are a documentary, Devic manipulated reality a little bit - he himself admitted how he told that guy from the Mountain Rescue Service to work near the church on Palm Sunday - but he nonetheless achieved a great, bitter point to the film in the finale where dozens of religious people are following the priest in a queue to the church, but don't even bother to react at dead baby crows falling in front of them, showing how they are only merciful when someone "programs" them to be.