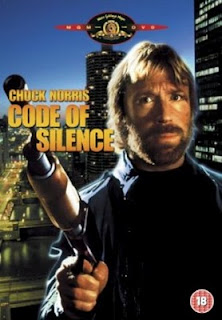 Chicago. Sergeant Eddie Cusack's long, carefully and meticulously planned operation, where his police team would sneak in into an apartment where thugs of the notorious gangster Louis were to sell them cocaine, goes completely wrong when a third party, led by criminal Tony Luna, attacks and kills them all, stealing both the money and cocaine. Seeking revenge, Louis wants to track down Tony, so Eddie has to protect his daughter, teacher Diana Luna, but she gets kidnapped. Complicating matters is the fact that nobody wants to help Eddie after he did not want to back up Detective Cragie, who covered up that he accidentally killed an innocent man during the operation. Still, Eddie manages to kill Louis and his gang as well as save Diana.

A refreshingly realistic departure from the rest of his films, crime drama "Code of Silence" is hailed and considered as one of the best Chuck Norris films, an unassuming and fluent little achievement: most of the praise goes to the competent direction by action director Andrew Davis who knew how to avoid banal cliches in most of Norris' films for a better story with an 80s flair. The crime plot revolving around police officers and gangsters selling drugs is standard, yet it shows much more realism than one would expect: for instance, after one officer (Dennis Farina) gets shot in the leg, we do not see him walking around the next day as if it was just a 'scratch', but he carries the cast on his leg for the rest of the film; similarly, when Eddie meets Diana Luna, the daughter of criminal Tony Luna, she untypically tells him about the burden of having a criminal in her family and how she just wants to live a normal life as a teacher. An occasional scene of inspiration is also welcomed in the film, like the humorous one where two small time criminals enter a bar to rob it, but get overrun and arrested with ease because it turns out it's a police bar! Up until the unconvincing finale, "Code of Silence" avoids Chuck Norris cliches and serves as a good and serious movie, whereas it even offers the action star in a small, but neat dramatic edition.