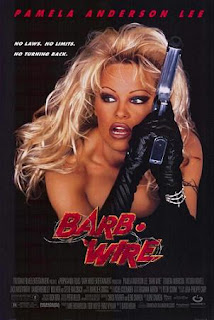 In 2017, the Second American Civil War broke out. Steel Harbor is the last free city in the US. It is there where the blond macho girl Barb Wire runs her bar, "Hammerhead", and often has to do extra jobs, like saving a kidnapped girl, in order to pay her staff. The Chief of Police Willis half-heartedly raids her bar and is actually her friend. One day, the leader of the resistance movement, Dr. Cora, arrives in her bar and brings her husband, Barb's ex-boyfriend Axel who left her without explanation years ago. Despite her grudge against him, she helps Axel and Cora escape to the free Canada, away from the Congresionals, while she stays with Willis.

A strange modern re-telling of "Casablanca" set in the futuristic US and with a blond woman taking over Bogart's part, "Barb Wire" is a 'guilty pleasure', a trashy film that never manages to be as fun as it could have been, but is still amusing to watch nonetheless. The critics were a little bit too harsh towards it: the film has only two truly terrible sequences (the 'fake hooker' moment and Big Fatso), while other than that it is a watchable and rather fluent "light" science-fiction action film where Pamela Anderson is actually very good in the leading role as the macho girl Barb Wire, delivering arguably one of her lifetime performances thanks to a few humorous dialogues ("I do believe I'm falling in love", says Willis, and she replies with: "Get in line!"), though Udo Kier also steals a few scenes as her cynical assistant. One has to admit that "Barb Wire" is really not sloppily directed, whereas the cinematography is stunning, yet the film lacks suspense, humor, style, spirit, developed characters and much more that would attach the viewers into an active movie experience or what would offer something more except for Pamela's body.