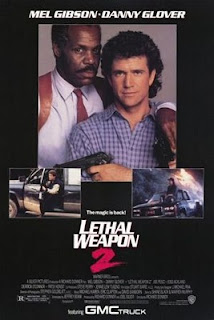 Police Detectives Riggs and Murtaugh are chasing after smugglers, but fail to capture them. They discover that the embassy of South Africa is involved in the smuggling, which is a very problematic situation - namely, it is prohibited by law to arrest ambassadors, which suits the bad guys fine. Also, Riggs and Murtaugh have to watch out after the protected witness Leo Getz, who annoys them with his babble. The bad guys place a bomb under Murtaughs toilet seat, but the SWAT team and Riggs manage to save him. They stop their ship and shoot Rudd, the diplomat.

The sequel to the 'hard boiled' original, "Lethal Weapon 2" is considered by some to be an even better addendum to the action series, even though it also has a fair share of heavy handed moments. The two heroes are placed as 'tough altruists' who bring justice the violent way, the dialogues are wooden whereas Riggs' romance with the bad guy's secretary ends up in a completely tedious manner. Still, there is a lot of fun: at the start of the film, the police officers bet over whether they will catch the criminals or not; Murtaugh gets flabbergasted when he finds out that his daughter stars in a TV commercial for condoms; the bad guys cynically place a bomb under Murtaugh's toilet seat, leaving him sitting there waiting for the SWAT team, but they also place it in bizarre places to assassinate other cops (one police officer opens his refrigerator and his house explodes). In some better hands, this fun film could have turned out into a little classic, like "Die Hard" or "Hard Boiled", since the blatant Apartheid accusations are a little bit cheap, yet the film still has its moments.