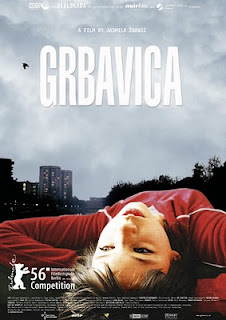 Sarajevo. Esma is a middle-aged Bosniak widow who lives in a small apartment with her 14-year old daughter Sara. Esma always told her that her father was a "Shahir", a Bosniak soldier who died while defending his country in the Bosnian War for Independence. Since her long awaited school trip is approaching, Sara asks her mother to find her dad's certificate, because children of "Shahir's" pay less for the trip. Esma finds a job as a waitress in a shabby night bar and meets Pelda, who becomes her close friend. On D day, Esma pays the full price for the trip. Upon Sara's insistence about the certificate, her mother finally confronts her with the truth: she was raped in a camp and her father was a chetnik. Though devastated, Sara attends the trip and starts to understand her mother more.

Winner of the Golden Bear, "Grbavica" was a hyped and critically acclaimed feature length debut film by Bosnian director Jasmila Zbanic. Her directing has flaws: the subplot involving the Pelda character (Leon Lucev) is unnecessary, the dialogue is sometimes flat, the story is heavily overstretched, especially in the middle, while one could even say that the real story could have started there where this film ended. However, that sole story about Esma - who was raped in a concentration camp but decided to keep her baby and raise her - and the way it was presented, is so honest, emotional and natural that it transcends most of the omissions. Unlike most war films, "Grbavica" said everything there needs to be said about the war just by showing an intimate small drama about the psychological consequences of it even in peaceful times; actually, it did not show any scene of huge explosions or gun battles and did not even need to show it, because it brought a stronger emotional effect in this unobtrusive way. It has two fantastic sequences towards the end, appearing right after the other; the first one is the devastating, shocking moment where Esma finally tells Sara the truth, which hits you like a tsunami, and the second one appears right after it, when Esma gives her confession monologue about her pregnancy, how she kicked her own stomach and did not want her, but how the baby was still born safely, which is one of the most touching things ever. Mirjana Karanovic probably gave the role of her lifetime as the main heroine, very honest and natural.