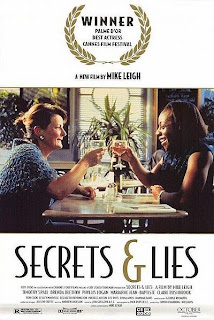 Black optometrist Hortense is participating at the funeral of her adopted mother. She then gets the urge to finally find her biological mother and discovers, thanks to some documents, that it's Cynthia (43), a sloppy factory worker who is - White! Cynthia lives in an ugly apartment with her second daughter Roxanne (20) who works as a dustwoman, while both of them have a grey relationship to each other. Cynthia's brother Maurice is an owner of a photo shop while his wife Monica can't have children. When Hortense meets Cynthia and introduces herself, she is at first shocked, yet they develop a very deep relationship. On Roxanna's 21st birthday, Cynthia brings Hortense to the party in Maurice's house. There she reveals the truth to everyone.

Extremely quiet, static and subtle family drama about adoption with a twist, "Secrets & Lies" was justifiably noticed and praised around the World, earning numerous awards. The direction by Mike Leigh is very realistic, at times it even reaches documentary proportions because it looks so authentic, yet it's not perfect - he let's the actors improvise in long takes that last up to 8 minutes, but at times he let's everything go loose too much, which makes his direction seem passive whereas the first half an hour of the film even reminds of some derivative soap opera - yet as soon as humorous elements are included, the story starts to function excellently. For instance, the messy Cynthia (wonderful Blethyn) doesn't at all know how to talk with her daughter Roxanne properly ("You have to have protection during sex. My old diaphragm must be lying around here somewhere...") and she is aware of her flawed competence, which is why she ironically says how the best birthday present for her daughter would be if she would throw herself under a bus. The main tangle, where the black Hortense finally meets her real mother, white Cynthia, is absolutely smashing because it speaks so much about mother-daughter relationships in such an absurd and subtly hilarious way, since Cynthia knew she gave her daughter for adoption, but wasn't aware she was black (!), captured perfectly in their dialogue ("Good day, are you Cynthia?" - "Yes." - "I'm Hortense." - "Damn it, what are you taking about?! No, no, honey..."). This could have been a lot more nuanced story, yet as it is it's a very compelling experience that says a lot about the absurdity of life in a sophisticated way.