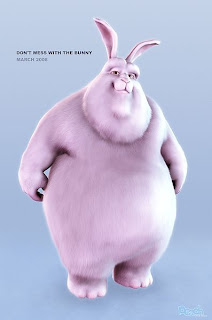 A giant, fat, but lovable bunny wakes up from it's habitat and enjoys a sunny day in nature. But he then spots three evil rodents, two squirrels and a rat, squashing a butterfly. They then go on to attack even him with rocks and fruits. But the bunny hides in the forest and prepares for a duel. Using booby-traps and weapons made from wood, he banishes the evil rodents and finally enjoys watching butterflies in peace.

An amusing CGI animated short film by the Blender Foundation, "Big Buck Bunny" is a completely insanely funny flick, totally random and surreal. It's rather shallow, banal in setting up the three rodents as the bad guys - when one mean squirrel squashes an innocent butterfly, the authors portray it almost as axis of evil - yet for a 10 minute short such 'gimmicks' are arguably forgivable in order to advance the plot and get to the point fast. And truly, it's such a twisted and wacky film, with jokes that almost remind of some episode from "Cow and Chicken". Without any dialogues, with a dynamic rhythm and a simple good vs. bad plot, it's the funniest in the sequence where the lovable fat bunny prepares to defend itself in "Rambo" style, by preparing arrows and booby traps in the forest, or a few wide angles that reveal some different perspectives, like in the scene where the evil squirrel is falling down to the ground crammed with spears, but luckily manages to save itself by grabbing to a branch - only to have the camera reveal in the next scene that the branch is held precisely by the bunny. Uneven, but fun.