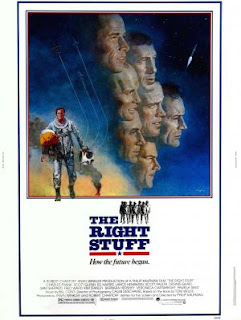 In '47, pilot Chuck Yeager becomes the first human who manages to break the sound barrier with his plane. In '57, the Soviets send the first satellite into orbit, and soon afterwards even the first man, Gagarin. In order to not stay behind, the US government start their own space programme. The status of the astronauts is given to Gordon, Gus, Schirra, Slayton, Carpenter, John Glenn and Alan Shepard. Despite numerous difficulties, including unstable test rockets that constantly explode, they manage to go to outer space and come back alive.

Philip Kaufman's magnum opus is an incredibly smooth and even achievement looking from any angle, since it eloquently handles the beginning of the "Space Age" in the US and portray several layers of the time and society in question. Even though "The Right Stuff" is excellent, it does starts to becomes slightly overstretched in the final act due to its three hours of running time, while the isolated segment with the pilot Chuck Yeager is rather questionable, yet as a whole it is a wonderfully set up story where the best parts are humorous, like when the reporters are so desperate to get an interview with the families of the astronauts that they even storm their laundry washer or when an Astronaut is in the rocket, waiting and waiting, until he finally asks for the permission to urinate in his space suit because he can't "hold it anymore". Director Kaufman avoids any kind of patriotism and cynically shows the US government whose only goal is to be first in everything, while he even inserts a sly metaphor about grasping and trying to achieve a human dream, even the impossible one, which forms a process of expanding the borders of possible as a whole and causes a change in the society. Full of passionately directed scenes, this is a thoroughbred depiction of the beginning of the modern age. An excellent role was achieved by Dennis Quaid as Gordon (when a nurse orders him to bring a sperm sample, he jokingly asks her to "help him"), but all other actors aren't weak by any means either, while the montage including Chubby Checker's song "La Bamba" is simply perfect.