He's Just Not That into You 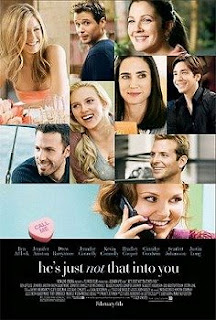 Numerous stories about complicated relationships: the young Gigi gets constantly dumped by her dates, until she meets bar manager Alex who gives her some advice about men. She falls for him. He rejects her, but then also falls in love with her...Aspiring singer Anna seduces Ben even though she knows he is married to Janine. When he juggles with both of them, they both leave him...Anna also once slept with Conor, but broke up with him even though she still keeps close contact with him. In the end, they become a couple...Mary tries to find a boyfriend through Internet...Beth and Neil are a perfect couple for over 7 years, but she breaks up with him because he doesn't want to get married. In the end, they make up.

A sweet, sometimes insightful, sometimes too sugary, too gossipy and too kitschy, romantic comedy-drama "He's Just Not That into You" is a proportionately well conceived, accessible and simple film about the ever evasive theme of human relationships. Even though it takes on a harmless tone, some of the situations depicted on the screen are sometimes painfully true and many viewers can be identified with them, among them how people never know what they want and thus are always on the lookout for a better partner as well as tricks and manipulations in order to just use one person. Because of that, the story gains a few plus points here and there, and is generally amusing without going into deeper inspection of it's topic. One of the finest examples of sharp observation can be found in the scene where Mary (Barrymore) calls her three friends to listen to her answering machine. She has 2 new messages. In the first, she hears the voice of Jude, a guitar singer she met on the Internet, singing "Mary, Mary, Mary...". The music is so romantic she gets all charmed, as well as her three friends. But then she listens to her 2nd message, where Jude's voice can again be heard singing, but this time: "Jenny, Jenny, Jenny...". After the obvious, there's a dispersal of her friends and she just angrily erases all her messages. Such and other moments of inspiration really ring true. Scarlett Johansson delivers another daring role as Anna who tells this to the married Ben: "You have an ass that makes me wanna dry hump!", but the best performances were delivered by Ben Affleck and Justin Long, who played the two male characters with most of class. On the other hand, some more unimpressed critics lamented about how the whole film looks like one giant "Beverly Hills 90210" episode, equipped with shallow problems revolving only around beautiful people, which is far from the ugly reality. And at some degree, that can't be dismissed, though the end result is charming.