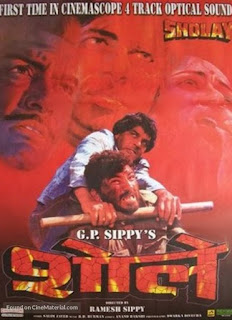 Gabbar is a notorious criminal whose gang descends from the hills to repeatedly attack a small village in the valley and force them to give them food. Thakur, a retired police officer, summons two small-time crooks, friends Veera and Jai, who are in their 20s, to hire them to capture Gabbar and end his reign of fear. Veera and Jai at first plan to rob the safe and flee, but change their mind when they see how villagers suffer from Gabbar's thugs. Moreover, they discover that Thakur once arrested Gabbar, but the criminal escaped from prison, killed Thakur's three children and his grandchild, and then cut both of Thakur's hands. In a battle around Gabbar's outpost in the hills, Jai is killed, but Veera manages to capture Gabbar. Thakur wants to kill Gabbar with his feet, but stops and hands him over to the police, instead. Veera leaves the village in a train, but falls in love with Basanti, a carriage girl.

One of the highest grossing and most popular Indian films of the 20th century, "Sholay" is a 'Hindi-Western' that manages to encompass some universal themes about humanity (friendship, honor, loyalty, problem of evil) and translate them into its own mentality. A blend of the "Seven Samurai" (except that there are only two protectors of the village here, and they are both young lads wearing modern 70s disco clothes and jeans) and "48 Hrs.", "Sholay" somehow manages to pull this bizarre syncretism through, but owes a lot of its influence to S. Leone's style since director Ramesh Sippy crafted a few surprisingly effective hypnotic-lingering-absorbing shots that give it weight, many of which are reminiscent of "Once Upon a Time in the West", whereas the score by R. D. Burman is great: while at first it may seem too simplistic, it grows on you with time. The main villain, Gabbar (excellent Amjad Khan) is a remarkably strong character, and even though he appears very late, over an hour into the film, almost every sequence he is in is great: he has a frightening presence, an embodiment of a survivalist, extreme authoritarianism and violent selfishness. One memorable sequence, which plays out in his open base on the hill, has him line up three of his henchmen as a punishment for failing an asignment, in front of his entire gang, and taking a pistol. He says: "Six bullets are not worthy for these three men!" and then shoots three shots in the sky. With three bullets left, he then plays roulette and decides to randomly aim and pull the trigger at the three henchmen from behind—yet all three triggers were empty. Gabbar then turns around and jokes that these three are "very lucky" and then everyone starts to laugh in relief—but then violently turns back and pulls the trigger three more times, this times discharging bullets and killing the three, anyway.

Even though it is a classic western and a 'good vs. evil' story, "Sholay" is puzzling to audiences of the West for also straying away from this genre and randomly traversing to different levels, including slapstick comedy, dance and a love story. One of the most bizarre comedy episodes is the segment where Veera and Jai are in a prison run by a warden who has a moustache and mannerisms of Hitler (!), but whose authority is often disrupted by clumsiness (a pigeon flying right in front of his face); Veera driving a bicycle by sitting on it backwards in order to impress girl Basanti whereas there are four pseudo-musical sequences present, one of which involves Gabbar forcing Basanti to dance for him on the canyon. While some have criticized it for being a "patchwork", "Sholay" is a film that shows how, even in the worst hardship and loss, life is never black-and-white, and always has some small moments of color and happiness hidden somewhere which should be included for a broader picture. The highlight is arguably the long sequence in which Takhur's all three grown up children are shot and killed near their house, while the suspense is heightened as the little grandchild spots Gabbar on a horse with a gun, slowly descending towards him from the hill, juxtaposed with a swing that is slowing down on swinging, and stops in tune to Gabbar final shot. The shot composition in that sequence is exquisite. "Sholay" is flawed: with a running time of three hours, it is overlong; some of its hectic camera zooms and camera drives are too shaky; some of its elements lean towards the exploitation genre, yet Sippy limns every character with a purpose, until the satisfying conclusion, creating a movie world that is its own and unique, regardless of all limitations. If all these ingredients worked in the 'Spaghetti-Westerns', there is no reason for them not to work even in India.