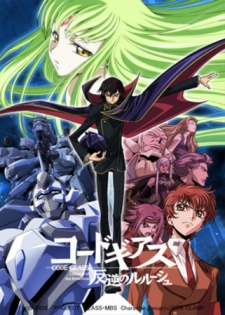 In an alternate Universe, Japan is invaded and annexed by the Empire Britannia, and subsequently given a derogatory new name, "Area 11". Now second class citizens in their own homeland, the Japanese strive for resistance and independence. Lelouch, an exiled teenager of Britannian blood whose mother was killed and sister Nunally left in a wheelchair, swears to his friend Suzako that he will get rid of Britannia. One day, he gets caught up in an armed clash involving a military vehicle, and opens its tank only to find a mysterious green-haired girl inside, C.C. The girl gives him a magical power, known as the "Geass": he can order any person to do whatever he says, but it can be used only once per person, and he has to look that person directly with his right, red eye. Lelouch is surprised by this new power, puts a helmet on and builds up a new identity as Zero, who commands The Black Knights, a group of rebels who want an independent Japan. They use giant robots to fight Britannians. However, things get complicated after Suzako joins the Britannians ranks, thereby getting in direct conflict with Lelouch.

Following the end of broadcast of "Death Note", a giant void was left on Japanese television, which just cried for a successor to try to fill the shoes of that instant anime classic about a special power that changes the world. "Code Geass" was seen as the closest attempt at that time, following a similar concept in which a complex protagonist-antagonist gains a special ability in order to challenge the establishment and achieve his goal, in this case "Geass", the ability to command anyone whatever he tells him or her to do, though it can be used only once. This ingenious premise offered an interesting commentary on some historical figures who come out of nowhere yet inexplicably rise through the ranks, becoming leaders in some groups, but it did not fully exploit all the rich potentials of such a juicy set-up—at least not in the 1st season—though it still has its moments. The 1st episode establishes that awe, when Lelouch is cornered by a dozen Britannian soldiers who aim their guns at him, yet decides to test his "Geass" and thus just orders them to shoot themselves, instead—and is surprised when they actually comply and commit mass suicide.

However, unlike the highly intelligent approach of "Death Note" that never tries to appeal to the wide audience, "Code Geass" does not reach that high level of authority, neither in style nor in execution, among others due to some banal, cheap elements (the rebels pilot giant robots, though this "mecha" genre is utterly unnecessary for this kind of story and disrupts the storyline through its heavy-handed action sequences; an occasional "fan service" moment in the Academy; some silly scenes, such as the episode in which Lelouch chases after a cat that stole his helmet in the Academy; a giant robot rotating a giant pizza at the school festival in episode 21...), as well as too many characters, of which not all are that memorable. The highlights are always connected when the anime is focused on this special concept. For instance, in one episode near the beginning, the rebels are caught in a battle with the Britannian army, and Lelouch/Zero simply goes to the enemy command center, "Geass"-tells a guard to simply let him in (!) and then goes directly to the commander, whom he "Geass"-orders to tell the army to surrender (!), and then simply shoots him. Another great moment is when Lelouch/Zero is seen interacting with Britannian commander Darlton, in episode 22, and this comes full circle during the battle in episode 24, when commander Cornelia, in her robot, is just about to kill Zero in his robot, but is suddenly pierced by a giant spike—thrown by her own subordinate Dartlon, who is confused why he is doing this. The fact that Zero "Geassed" Dartlon off-screen in episode 22, to attack his own superior if Zero is about to lose, is simply an exquisite checkmate and gives this plot twist intensity and spark. More of such moments would have been welcomed, though, since too much time is spent on Lelouch's internal conflicts, which are never on the same intensity as when he is using his "Geass". Simply put, "Geass" is more important than Lelouch, and not the other way around, which is rather indicative.