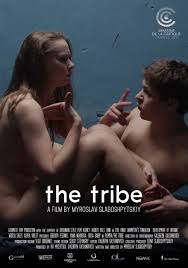 Sergey, a deaf lad, is a new student at a boarding school for the deaf. He is quickly forced to integrate into a local gang, "The Tribe", and join other teenagers who rob people in a train or simply earn money by sending two girls as prostitutes to have sex with truck drivers. Sergey is assigned to be the next pimp of the two girls, but is attracted to one of them, Anna. They have sex. She gets an abortion. He assaults a teacher and robs his place, giving the money to Anna before forcing sex from her on her bed. When the two girls get passports to travel to a foreign country, Sergey tears Anna's passport, and thus the gang hits his head with a bottle. The next night, Sergey sneaks into the shared bedroom, takes two heavy closets, and crushes the heads of the four boys who were part of the gang.

An extremely raw and astringent film experience, this art-drama is a highly daring little film that decided to follow a logical thematic step and present the world of the deaf through a story without any dialogues or even subtitles, thereby demonstrating the world of the protagonists. A lot of kudos should be given to writer and director Myroslav Slaboshpytskiy who decided to go through this brave experimental approach and set up "The Tribe" almost as an silent film. The cinematography and  camera drives are very modern, especially in several long tracking shots of the main character, among them when the camera follows him descending from a hill, entering an apartment complex, knocking the professor unconscious and then going from room to room to try to find some money from his place. At least two sequences are very difficult to sit through: one is the agonizingly long, ugly and dark moment of Anna having an improvised abortion by an older lady, sitting on a bath tub, and the other is when the main character secretly enters the boarding school at night, then the bedroom of the two boy criminals, and then simply kills them by crushing one's head with a closet, and then the other one's head as well: nobody can hear anything, anyway, since they are all deaf. However, Slaboshpytskiy decided to craft the entire film in long takes (allegedly there are only 34 cuts in the entire film), yet this might have been a mistake: since there are no words and no subtitles, "The Tribe" should have relied more on telling the story visually, with more cross-cutting, details and close up shots to elaborate on the characters' feelings. A majority of the scenes are done in wide shots, and thus it is sometimes difficult to decipher what is going on in particular scene or to follow the story. For instance, when Sergey and Anna have sex, it comes as a surprise since there was practically no interaction between them. This would have worked if he relied on close-up shots and detailed gestures between them, of them interacting, but it seems rather "far-flung" in this edition. The director understood the sign language very well, but still did not quite fully understand the movie language in order to better present this story.