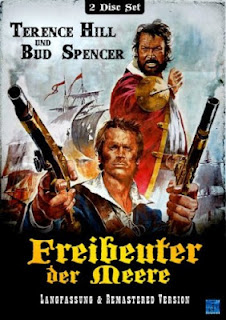 Pirate leader Blackie hears the news of an upcoming shipment of Spanish gold from Don Pedro and decides to steal it. In a pirate settlement, he discovers that among the captured people is Isabel, the wife of his nemesis viceroy from the Spanish colonies. Blackie buys her to have a bargaining chip against viceroy, but the two of them develop feelings for each other. Three other pirate gangs, among them one led by Skull, want to beat Blackie to the punch and steal the gold before him. Skull and viceroy die in the fight, while Blackie gains the upper hand.

After their breakthrough film, "They Call Me Trinity", established that they work the best in humorous stories, it still comes as a surprise that director Enzo Gicca right afterwards decided to again cast Bud Spencer and Terence Hill in another 'dramatic' film, the pirate adventure extravaganza "Blackie the Pirate", their last serious film together. While Colizzi's "Boot Hill" showed that Hill and Spencer can be convincing in more mature, bleak stories, "Pirate" is a solid, but unexciting and standard achievement where the chemistry between the two of them really seems to be leaning towards another genre, since the situations did not get the best from them, nor extracted sharpness from their interactions, whereas the fencing and sea battle sequences started to get sligthly tiresome towards the ending.  The story is a dime a dozen in the genre, with few memorable moments (throwing a cannon from the ship), though the set designs of the ships and the sea locations are opulent. A few twists, unusual decisions or examples of humor would have been much more welcomed, though.