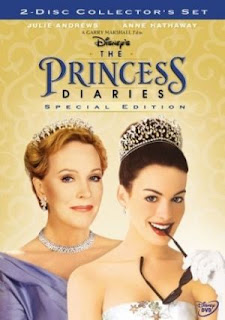 Mia Thermopolis is a normal teenage girl who lives with her mother, but is unpopular in school and has only two friends: Lily and Michael. However, one day she is surprised to find out that her father was the Prince of kingdom Genovia, and that she is expected to become the next princess. Her grandmother, Clarrisa, manages to persuade her to undergo a 'princess education' and accept her role. She is also supported by driver Joseph. Unfortunately, Mia discovers all the disadvantages of royalties: the reporters are there where ever she goes while a guy, Josh, just wants to be with her to exploit her fame. However, in the end, Mia decides to accept the post of the princess.

With her first film, Anne Hathaway already demonstrated why she is one of the best actresses of her generation: her role in "The Princess Diaries" is completely naturally charming, without any traces of trying to impose on the viewers, and all the good parts in the film are either thanks to her, through her or about her, with rarely something memorable happening outside of her presence (one rare instance is the joke where the Genovian kingdom serves a soup with a cream shaped in the form of a letter "G"), though that is not necessarily something bad. Gary Marshall manages to show an elegant sense for showing teenage mentality on film, though the discrapancies are there (why would Mia's classmates make fun of her after finding out she is a royalty? Wouldn't it make far more sense for them trying to appeal to her?) and the storyline is rather bland and vague, especially towards the increasingly stale finale and predictable messages about real and fake friends. Still, overall this is a fun and accessible 'coming-of-age' movie, mostly thanks to the already mentioned performance by Hathaway (even physical jokes manage to work thanks to her, like the one where she amusingly tries to cross her legs just to fall off the chair) who gives it playfulness, though other actors are also good, from Andrews, through Elizondo up to Matarazzo.