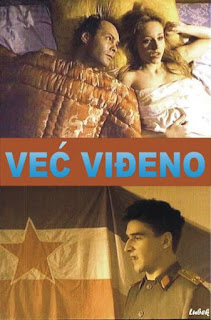 In '71, the unsightly Mihailo works as a piano instructor in a education centre. He was once a gifted pianist, but was left traumatised after he saw his father having an affair with another woman in bed. Also, his father was convicted by the Yugoslav authorities for performing during the Axis occupation, while his mother died from a sickness. In present, a new girl joins the centre to teach ballet, Olgica. To Mihailo's surprise, she decides to have sex with him, but he finds out she only does that to forget about her alcoholic father and little brother who cannot afford eye surgery. The boy enters her bedroom and sees them having sex, which awakens Mihailo's memories from childhood. When the centre is suppose to host a Relay of Youth, Mihailo causes shock when he refuses to play the piano in front of the cameras. Realizing that Olgica found a new lover, he kills them both and her father in their home.

Even though it won the Golden Arena for best film, Goran Markovic's film "Deja Vu" is a highly bipolar, uneven achievement: it works while it is a tragic psychological drama, but when it switches into a thriller in the finale, it turns into an excess that extracts all the worst Yugoslav cliches. Markovic has a good sense for creating an eerie mood (the very good opening 4 minute shot, filmed in one take, that follows the POV of a man who observes a piano player in a theatre; the scene of a dog jumping in the room filmed through the fish eye lens) and contemplates about the parallels of the hero's past and his actions in the present, posing the question about some cyclical events in life and history in general. It is also noteworthy to observe how Markovic uses some moments to often "accidentally" give a critique of the Yugoslav society and its party system - for instance, Mihailo and Olgica never have peace while having sex because they are both subtenants in crowded apartments (accommodation planning); her brother wants to have eye surgery in the West (inadequate health service); Olgica mentions how the only way to secure yourself a comfortable life is to become a party member, etc. However, at least one such political jab is grotesquely misguided and forced, the infamous sequence where a young Mihailo is informed that the party gave half of his apartment to others and thus has to help move a huge cupboard, just to get stuck in a corner of a room at the exact moment when his mother dies, which is an embarrassing piece of melodrama. The syrupy music did not help either. The worst part is the 15 minute ending, though, that suddenly became an (unconvincing) thriller with unintentionally comical moments (the dog goes after Mihailo in a room, the door closes, and then opens to show Mihailo carrying the dead dog on his shoulder), which in the end do not manage to bring whatever point the director had to the audience.