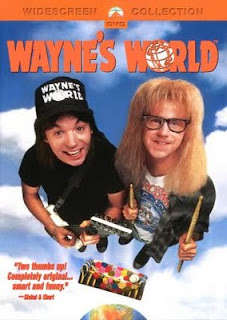 Aurora, Illinois. Wayne and Garth are two youngsters who run a local show at an open channel, "Wayne's World". They still live with their parents and don't have a job, but enjoy their lives and music. Wayne starts a relationship with Cassandra while the wealthy producer Benjamin buys their show to promote it. However, when Wayne makes fun of his sponsor, he is fired while Benjamin goes to Chicago to film a music spot with Cassandra. Still, Wayne manages to gain Cassandra's heart again in the end.

Based on the eponymous popular sketch from the TV show "Saturday Night Live", "Wayne's World" is one of those movies that charm more with their enthusiastic energy than successful jokes, yet since the sympathetic Wayne and Garth are Mike Myers' and Dana Carvey's lifetime achievements, it is simply difficult for viewers to ignore their contagious fun. Somewhere near the opening, when Wayne, Garth and their friends are driving in a car, listening to Queens' "Bohemian Rhaspody", the lyrics "Nothing really matters..." sum up how their characters are entirely uninterested in politics, life problems or social order and only live for jokes and music. The Shitty Beatles rock band joke is a riot, the "Camera 1, camera 2, camera 1" sight gag, when Wayne is flip-flopping between his left and right eye while looking at Cassandra, is sympathetic, whereas Garth's antics and one-liners are incredibly underrated and almost steal the show ("Did you ever find Bugs Bunny attractive when he put on a dress and played girl bunny?"; "It's like a new pair of underwear. At first, it's constrictive. But after awhile it becomes a part of you"). There are too many obscure gags, definitely, whereas the ending is clumsy and rushed, yet just like similar "Bill and Ted's Excellent Adventure", "Wayne's Word" is simply a good 'hangout' comedy film, perfectly able to carry their daft mood and entirely relaxed in being true to its own spirit.