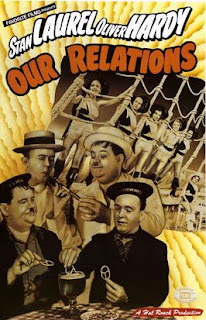 Laurel & Hardy are married, wealthy and respectable friends. Thus, they are ashamed of their twins, Alf and Bert, who work as sailors on a boat. Their twins just arrived in the city in order to transport an admiral's ring. But they don't have any money in order to pay some ladies a drink at a bar, so they leave the ring as a payment. When Laurel & Hardy pay the bill, not knowing for what, though, they receive the ring. Since Bert and Alf start a fight with the owner of the bar, who is convinced he returned their ring, they land in prison. There, the judge releases them, mistaking them for Laurel & Hardy. When the twins finally meet, they realize what caused all the commotion.

"Our Relations" are as a whole a proportionally memorable Laurel & Hardy comedy having in mind the lax opening. The story presents the two comedians in a double edition, since they star both as themselves as well as their own twins - Alf and Bert! - so the majority of the story revolves around troubles caused by the latter on one place which are then "inherited" by Laurel & Hardy who accidentally show up there and then have to settle things out for them, without knowing why. In one joke, Alf & Bertie show up at a bar and promise to pay some ladies a drink, but have to leave the premise in order to get more money. Two hours later, Laurel & Hardy enter the same bar - with their wives - and obviously, the bar owner immediately attacks them because they didn't pay the bill, which they do without knowing why, though the ladies ask them "what took you so long?" It's a simple, accessible and fun comedy, with flaws and some omissions, yet it contains arguably the funniest, most insane and laugh-out-loud sequence in the entire career of the comic duo: the one where Laurel & Hardy have their legs placed in oval cement blocks; when gangsters push one of them, both of them tip, but then dodge back and start uncontrollably swinging, accidentally throwing gangsters into the sea, break the door, get stuck in a barrel and all other wacky, impossible swinging movements while trying to catch each other.