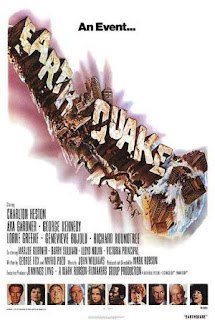 Los Angeles. Several stories and personal fates - ex-football star Stewart is in love with the widowed, struggling actress Denise who lives with her son Corey, while Stewart's ex-wife Remy is trying to undermine their relationship by asking her father, Stewart's boss and superior, to promote him if he yields; police officer Lou is disappointed by his profession; a stuntman wants to impress a Las Vegas talent scout; a bullied store manager enlists for the reserve army - are shaken by a devastating earthquake that destroys large parts of the city and causes the release of water from the dam.

For all the machinations with the now defunct "Sensurround" extravaganza that tried to conjure up the feeling of tremors in theaters, Mark Robson's "Earthquake" is a solid and even today proportionally effective piece of 70s disaster film genre that massively attracted audiences optative to sense hysteria in a story of an unstoppable natural disaster. Penned among others by Mario Puzo, "Earthquake" tickles the ever present fear of a large earthquake hitting L.A., and despite some roughly patched stories contains enough good scenes, mostly humorous ones, such as when two disappointed police officers are sitting at a bar and not reacting to a fight behind their back, whereas Genevieve Bujold is great as struggling actress Denise, especially when she tries to describe her small role to the hero ("Talk, talk, talk, I walk in, introductions, introductions, introductions...Then...The main star, you, makes his appearance."). The sole 9-minute sequence of the tremor in the middle of the film is phenomenal (a highway collapse that derails a truck, mass panic of people on the streets, collapse of buildings...) equipped with a small humorous touch involving Walter Matthau's character who just indifferently sips his drink at the bar the whole time, while the film turns rather tiresome and schematic during dry scenes of saving people, up until the unusual, completely untypical ending that shows that not every event can end up that neatly.