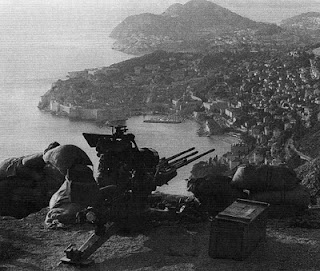 In October 1991, the insanity called "Greater Serbia" infected Montenegrin officials who ordered the Serb controlled Yugoslav People's Army to start the siege of Dubrovnik, the pearl of the Adriatic. The documentary chronicles the events, from propaganda of invisible "30,000 Croatian fascists" attacking Montenegro, the shelling of the city, international reactions up to the plan to create a Dubrovnik Republic puppet state loyal to Slobodan Milošević. After the siege failed, the city slowly returned back to normal while Croat-Montenegrin relations improved. The International Criminal Tribunal for the Former Yugoslavia (ICTY) sentenced general Pavle Strugar to 8 and Miodrag Jokić to 7 years in prison.

The siege of Dubrovnik, the harmless UNESCO World Heritage site, is still one of the strangest sights of the 20th Century. It can only be compared to the "bright idea" of an army shelling the Sistine Chapel, the Pyramids or Stonehenge. Such a ruthless tactic of attacking a demilitarized city - apart from clearly showing the feature and real nature of the whole war - offers a great story for a documentary, and Snezana Rakonac's "War for Dubrovnik" is an excellent example of it, always staying objective and honest. Even though it features a collection of well known clips from the TV archives of that time, and even though it lasts for over 4 hours, every second of "War for Dubrovnik" is suspenseful, exciting and gripping, skillfully juggling with such a difficult theme and evenly presenting a clear chronology. Some of the highlights are rare interviews, among them by Dubrovnik composer Đelo Jusić who recollects how he orchestrated a concert of classical music during which the army shelled cultural monuments around him in a scene "that is so morbid that not even Tarantino would put it in a movie" or a Yugoslav Army officer who, obliviously, speaks right into the camera: "This is a war for peace!", not knowing how close he unintentionally came to Orwell's "Nineteen Eighty-Four" and its slogan "War is Peace". A remarkable and unapologetic piece of journalism, even going so far to illustrate the impotence of the spineless ICTY to adequately punish such crimes (the "toughest" sentence was 8 years - no joke, courtesy of judge Kevin Parker), yet as a whole this a documentary that advocates reconciliation and honesty.