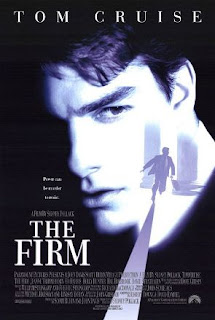 Fresh law graduate Mitch McDeere and his wife Abby leave their hometown and move to Memphis in order to work in a mysterious, but very profitable firm. He earns extremely well and receives unbelievably good conditions. However, one day an FBI agent contacts him and reveals that his firm is actually connected with the mafia - and that anyone who ever wanted to leave that job was found dead. After finding out his home is bugged, Micth decides to transfer the firm's compromising documents to the FBI. He gains his freedom and returns to his hometown with his wife.

This adaptation of John Grisham's novel with the same title is a conventional law-thriller with a rather unnecessary running time of 154 minutes which will manage more to engage fans of the stars in the story than fans of universally quality movie making. "The Firm" is a tight and solid achievement incorporating a theme of honesty, whereas director Sydney Pollack enriched the storyline the best he knew thanks to discipline and a suspenseful finale, since the mediocre writing and structure narrowed his maneuvering space. Tom Cruise is solid in the leading role, yet the top-notch performances were again delivered by brilliant acting veterans Gene Hackman and Ed Harris. The cinematography is also fantastic. All in all, "The Firm" is an honest, but standard and stiff version of a story that could have been extended to far greater heights and dimensions than here.