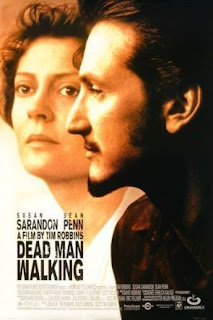 Louisiana. Catholic religious sister Helen Prejean receives a letter from Matthew Poncelot, a convicted murderer who killed a teenage couple, asking for her assistance about his appeal since he is on a death row. She has a difficult time communicating with him, since he claims his colleague Carl killed the couple, while he was only watching it. She hires an experienced lawyer in order to overturn his verdict into life in prison, but to no avail. Just hours before he is executed, Matthew admits he killed the couple and asks everyone for forgiveness.

Based on a true story, Tim Robbins' second feature length directorial film "Dead Man Walking" received critical acclaim and numerous awards, among them an Oscar for best actress in a leading role for Susan Sarandon. It tackles the difficult subject of death penalty in order to start a discussion among the audience, exploring both sides of the argument - is it morally justified to punish a murderer with execution? Does it follow the principle of equality? - and skillfully avoids a preachy propaganda by aggravating the experience of the viewers since Matthew is not a sympathetic character - he is not even a nice man at all. Also, only faced with death, he finally confronts his misdeeds and admits he actually killed the couple, making this even more complicated. It is a quality film, but seems too "fixated" and overtly dramatic, showing that Robbins was obviously much more versatile in his first directorial film, satire "Bob Roberts". It pushed all the right buttons, yet simply did not go to some deeper heights of cinema.