Ghost Dog: The Way of the Samurai 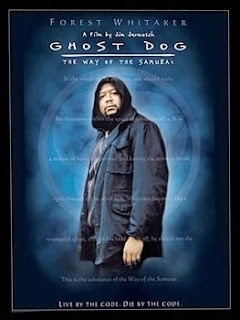 Ghost Dog is a strange person. He reads Japanese books, lives on the roof of a building and gets messages through pigeons from mobster Louie who gives him assassination assignments. Louie saved his life and from there on he owes him his services. One day Ghost Dog eliminates a mobster, but was seen by Louise, so gangster Ray and his associates unite to punish him. The killers kill the pigeons on the roof, but Ghost Dog kills them all in their mansion. Louie shoots Ghost Dog while a girl gets his books.

Just like in his previous film, Jim Jarmusch again surprised by stepping into a more dynamic story in "Ghost Dog", but like most films of the "problematic director", this one also has a slow tone that tends to turn empty at times. In some other director's hands, the title anti-hero would have ended pointless or like a caricature, but Jarmusch avoided it, creating quality by juggling with opposite minimalistic-action styles, inserting poetry (a bird lands on the gun) and humor (Ghost Dog storms into the mansion of the mobsters, and spots two of those seniors, aiming two guns at them with both of his hands. But when he sees him, the old Joe gets scared, shouts: " It's him! It's the damn Bird man!" and then dies from a heart attack. Subsequently, Ghost Dog lowers one of his guns down; in another sequence, the angry gangsters shoot his pigeons), whereas the above mentioned short action sequences are occasionally virtuoso directed. However, the story is filled with random symbols (could the fact that the mafia is often seen watching cartoons, from "Looney Tunes" to "Felix the Cat", a hint how childish they are?) and uneven bitterness combined with grotesque that don't seem like a natural hommage to Melville's "The Samurai", whereas it's a pity that Jarmusch spends too much time on collusive lessons by the title antagonist.