A Friend is a Treasure 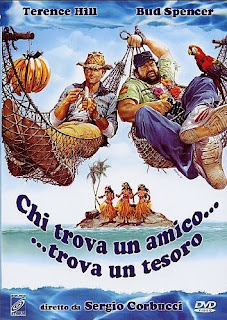 Alan wants to find the alleged treasure on an island using the map of his uncle. Fleeing away from debt collectors, he hides inside the ship of a certain Charlie, who is starting a promotion tour for his sponsor, a food he can't stand. Once in the Pacific Ocean, Charlie discovers Alan and wants to get rid of him, but he directs the ship towards his island. In an argument, the both fall from the ship and thus get stranded on the island where they find natives and an abandoned Japanese soldier who still thinks the World War II is ongoing. After finding a large sum of cash, the beat up the local pirates and debt collectors, mistakenly giving the money to the US army because they thought it was counterfeit.

The 13th out of 17 films by Bud Spencer and Terence Hill, "A Friend is a Treasure" belongs to the weak phase of their opus in the 80s, where they made films that did not quite serve to their advantage. Sergio Corbucci, the director of the brutal "Django", crafts an untypically harmless fun without too much energy or inspiration. It's a weak film with only 4 good jokes in 90 minutes; two at the beginning (one of them is when Spencer's character Charlie is hungry and wants to smash a giant egg to make an omelet, but only a snake emerges from the shell!) and two at the end, while the rest is a long empty walk of the two heroes dragging along the island and searching for a treasure, whereas the portrayal of the mumbling native Anulu came close to an annoying caricature. Surprisingly, contrary to the bland storyline, the landscapes and especially the irresistible song "Movin' Cruisin" by the Fantastic Oceans, with a great 80s flair, are fabulous. As a thin film with only the classic fist fighting finale, "Treasure" does not manage to grasp the heights or charm of some of the best Spencer-Hill comedies, like "They Call Me Trinity" or "Watch Out, We're Mad".