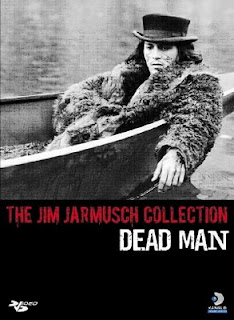 19th Century. Accountant William Blake arrives with the train to the small company town of Machine for a promised job. But he does not get it - the company informs him rudely that he is one month too late and boss Dickinson throws him out. Blake accidentally meets former prostitute Thel and spend the night with her. When her ex-boyfriend Charlie shows up, mayhem erupts: Charlie and Tel are killed, while a wounded Blake barely escapes to the forest where he is nurtured by a strange Indian, "Nobody". Since Charlie was Dickinson's son, he hires three bounty hunters to capture Blake. In a long journey, "Nobody" and the remaining bounty hunter kill each other, while a dying Blake floats in a boat.

"Dead Man" is arguably the best Jim Jarmusch film: it's the kind of experiment that can be expected from an unusual director like him who directed his first and only western in his career - one could only compare it with what it would look like if for instance John Ford would have directed "Mystery Train" or "Broken Flowers" - it is enigmatic and esoteric, but also an entirely refreshing departure from Jarmusch's typical style, as if it was directed by someone else. Namely, on one hand, "Dead Man" contains all the Jarmusch trademarks - it again insists on his de-dramatization of the story, completely opposite of the mainstream tendency of exaggerated melodrama, crafting a quiet, unassuming storyline in the form of a road movie, and is even filmed in black and white. Yet, on the other hand, instead of his "passive", minimalistic directing, this film offers him in "active directing", equipped with numerous vibrant creative and innovative ideas, as well as an almost dynamic chase story, enriched with a few funny-burlesque moments (a standing horse urinating; Depp's character William Blake arrives in the company office to get his promised job position, but the business manager tells him he is one month too late and the position is already filled by Mr. Olafsson, who shows up and obliviously raises his arm to shake his hand; Mr. Dickinson shows up in the office with the three bounty hunters but speaks to them while looking at his stuffed bear the whole time; a bounty hunter sleeping with a teddy-bear).

The shooting and the murders are short and realistic, always avoiding the annoying tendency of one guy shooting hundreds of bullets at another and still missing. Also, by showing the town of Machine as the "end of the railroad", it symbolically shows how the old cowboy culture is slowly dying and is getting replaced by technology and progress. If that weren't enough, the author inserted a sly "breaking the fourth wall" idea: Depp's character is named William Blake, after the poet with the same name, yet he ironically never heard of him. But the Indian "Nobody" knows almost all of Blake's poems: by having "Nobody" directly randomly reciting William Blake's poems, while at the same time the character of William Blake does not know what he is talking about, the film achieves a sublime metafilm charge. Maybe the main hero is not portrayed enough and maybe some scenes do seem too bizarre, yet many moments are black poetry, like the virtuoso sequence where Blake finds a dead fawn lying on the ground. He touches its gunshot wound and then touches his own gunshot wound. And then he lies on the grass besides the fawn, in a strange moment that shows how both of their lives have been interrupted.

Excellent review. Its the best film made by Jim Jarmusch. He has made the film with so dedication that made the film a success. movies