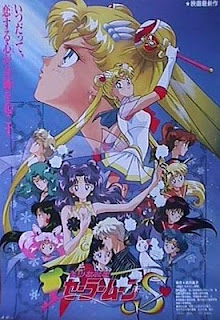 The Earth is again threatened by the mysterious Snow Queen from space, who wants to cower the whole planet with ice. But she needs to find a piece of her comet to do so, which was discovered and picked up by astronomer Kakeru who lives in his observatory. He also picks up cat Luna, who had fever, and helps her turn healthy again. She falls in love with him and tells that to Usagi Tsukino. However, Kakeru is often imagining that "Princess Kaguya" lives on the Moon, which is why he is misunderstood by his girlfriend, astronaut Himeko who leaves him. When the Snow Queen takes away the Comet piece and attacks the world, Sailor Moon and the sailor senshi stop her, and they also transform Luna into a human form for a few minutes to comfort Kakeru and bring him back to Himeko.

The 2nd out of 3 feature length anime films set in the "Sailor Moon" Universe, "Sailor Moon S: Hearts in Ice" is a gentle romance film, appropriately dreamy and mystical for its fantasy genre, establishing quite an unusual love story: the one between astronomer Kakeru and Luna - a talking cat. Despite top-notch animation and crispy-clear cinematography, "Ice" can't be considered the equivalent to the anime series, or the most representative of all "Sailor Moon" anime films for that matter, due to a rather sappy story that isn't especially subtle when it tries to bring its message across, the one of a scientist who also has faith in some things outside science, symbolically present in astronomer Kakeru who believes in "Princess Kaguya on the Moon". The special manga side story by Naoko Takeuchi, "The Lover of Princess Kaguya", wasn't the best of the "Sailor Moon" side stories (many consider it to be "Casablanca Memories"), and logically the movie wasn't the best: the new villain, a Snow Queen from space, comes across as standard-cliched, looking more as if it seems that she is just there because she has to be for the plot sake than as if she is there for a reason, and the Outer senshi lack screen time this time, though for a 60-minute film the story flows smoothly, has charm and humor whereas the direction by Hiroki Shibata is competent. Despite some sentimental-melodramatic scenes, the film has at least two perfect romantic moments: the one where Luna asks Usagi to explain her feelings for Mamoru and she does that by keeping her palms together, while both her ring and little-finger keep stroking each other bashfully, and the other one is when Luna kisses Kakeru and then runs across the meadow in happiness.