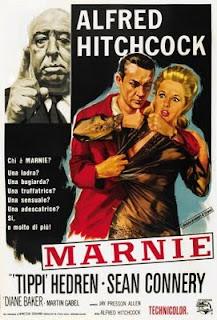 An angry boss in a company is horrified when he concludes that the secretary, Marion, stole from the safe. But Marion's real name is Marnie and she lives with her mother. Due to kleptomania, she again applies for a job of a secretary, but this time at the rich Mark, and again steals from the safe. When Mark catches her, he forces her to marry him in exchange for not notifying the police. She quickly discovers that Marnie has a complex inherited way back from her childhood, so he brings her to her mother. There he discover the truth: her mother was a prostitute who had an argument with a client, so Marnie killed him when she was a child.

Alfred Hitchcock, who with time got more and more untrammelled, shocked the producers with the way he planned to film the intercourse between the title heroine and Mark: "I want him to stick it into her and the camera to film her facial expression during it!" The above mentioned scene, after a compromise, in the end looks like this: Mark disrobes Marnie naked (though her intimate parts are never shown), the camera follows her head in close-up while she is lying on the pillow, there's a close-up of his eye, the camera turns away towards the window. Though, it still looks quite daringly intimate for its time, which is exactly what Hitchcock was aiming at in the story. However, despite that fact that it contains all the typical calligraphy of the master (Hitchcock himself has a cameo 5 minutes into the film as a man exiting the hallway), "Marnie" is still a slightly disappointing film about the complexes and trauma from the childhood and, especially fascinating, about the frigidity of the heroine. It is a clever idea that whenever Marnie sees red color, which reminds her of blood, the whole screen becomes red, yet the whole story is overstretched and unfocused, sometimes even clumsy. Especially unconvincing is the final flashback of her childhood, though some critics consider it one of Hitchcock's more neglected, psychological films.