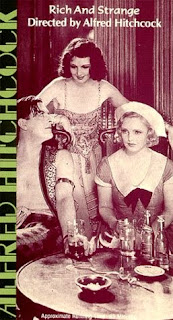 London. Fred has a grey job. In short, he is fed up with his life. But then he gets informed that his relative gave him a fortune. Overwhelmed, the couple decides to take a sea trip to Asia. They go to Paris, and then board a ship, but Fred gets sea sick in the Mediterranean. Passing by the Suez Canal, Emily falls for adventurer Gordon while Fred gets seduced by a “Princess”. Arriving in Singapore, Emily leaves Gordon, while Fred is dumped by the “Princess” who steals his money and runs away. The couple’s ship even sinks, though they manage to return back to London.

One of the early films from Alfred Hitchcock’s career, more precisely his 17th film, “Rich and Strange” is a watchable flick that meanders somewhere between drama and comedy and is, neither stylistically nor story-wise, sure of what it wants or needs to be. The movie starts off nicely, almost as a slapstick comedy: the protagonist Fred leaves his tiresome work but can’t open up his umbrella on the street even though it’s raining; he accidentally plucks a feather from the hat of a lady in a subway and his wife Emily awaits him at home with steak-and-kidney pudding. But once the journey of the couple starts, the story becomes a mess – the story is all over the place, with sloppy sightseeing shots of Port Said, Suez Canal, Colombo and Singapore, all of which seem like random episodes that don’t contribute to anything, while everything was additionally underlined with, it seems, the authors’ indecisiveness over whether it is a sound or a silent film – for instance, the opening is almost entirely without sound. In another scene, in Paris, performers sing and play on the stage, some even look in the camera, but you can’t hear them – you just hear the film’s music. After Fred meets the ‘Princess’, there’s an unnecessary black screen with a title written on it: “Fred meets the Princess”. The only moment where Hitchcock manages to get a grip on the film is the sweet scene where Emily sees the photo of her beloved Gordon sitting alone with an empty chair opposite of him. So she mischievously takes a marker and draws a caricature of herself sitting near him on the photo. And as the “master of suspense” himself stated in Truffaut’s biographical book “Hitchcock”, at least one gag became legendary – the one where the couple eats some unknown food and regards it as delicious, and then in the next scene they realize the Chinese made it out of a cat.