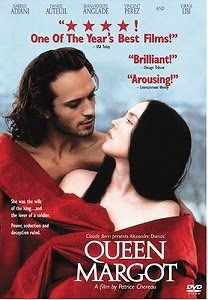 Paris, 1572. France is experiencing the Wars of religions and is split between the Catholics and Protestants. In order to unite the country, queen Catherine de Medici arranges for a forced marriage of her daughter Margot with the leader of the Protestants, Henri de Bourbon. But after the marriage, king's soldiers kills a mass of Protestants and capture Henri. Margot saves Protestant La Mole from the massacre and falls in love with him. When Henri saves the life of Charles, Margot's brother, he gains him his freedom. Charles gets poisoned, Le Mole killed while Charles IX gets crowned.

"Queen Margot" is an unusual history drama that placed much effort on breaking the cliches of its genre and approaching the Renaissance problems towards the modern day problems, earning praise whereas it was even nominated for a Golden Globe (best foreign language film) and an Oscar (best costumes design), winning the Jury Prize at the Cannes. Director Patrice Chereau, just like in his previous films, infiltrated much passion into his characters, which is why Queen Margot, on her wedding night, has intercourse with a complete stranger on the street, and she was also the object of desire of her two brothers. Especially funny is the exposition in which a tired Catholic finds a Protestant in his hotel room and is forced to share a bed with him, yet as a whole the story is slightly overlong and too demanding at times. Still, it juggles exquisitely with symbols revolving around the maddens of religious fanaticism and fight for power, while Isabelle Adjani rightfully gained universal acclaim.