I Hired a Contract Killer 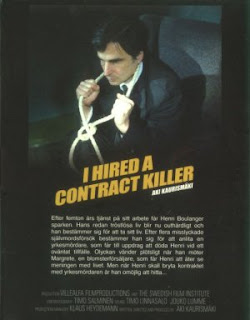 French man Henri Boulanger lives in London. His job in the office is boring, the weather is constantly cloudy and top of all he is single. When he gets fired because he is a foreigner, he decides to kill himself. He takes his money and hires a contract killer called Harry in some bar to kill him. However, Henri gets a new will for life when he starts to smoke, drink and love the rose saleslady Margaret. He tries to persuade the criminals to leave him alone, but the bar was demolished in the meantime. But Harry is sick and kills himself, so Henri leaves with Margaret.

"I Hired a Contract Killer" isn't quite an honest refreshment from the secluded Finnish cinema even though the basic premise is original: a neat shrill mood is established when the hero Henri goes to a bar and hires a contract killer, giving him a photo of the victim (himself!) upon which the criminals try to talk him out of it, but the humor is too thin and quickly loses its steam. Director Aki Kaurismaki has a good rhythm (and economical, since the movie's running time is only 75 minutes) and manages to make even empty scenes seem meaningful, but either he doesn't know how to lead his main protagonist or he didn't feel "at home" in London, away from his home terrain. Somebody else would have taken this cartoon concept and make a real culmination of absurd out of it, but this isn't the case here. If there were more humorous ideas, something that would make the movie more engaging, this wouldn't have ended like a TV production.