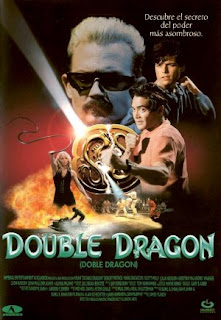 In the distant past, a Chinese medallion was created that has special powers, Double Dragon. In New Angeles, in 2007, martial arts brothers Jimmy and Billy are coached by Satori, who has the one half of the medallion. But the evil Koga Shuko also has one half and wants the other to rule the city, since he already discovered some of its powers. His men kill Satori, so Billy and Jimmy team up with Marian, a member of the gang PowerCorps, who helps them arrest Koga Shuko and save the world.

To develop and adapt a novel can be difficult enough, and unfortunately, ungrateful, but its even more difficult to do the same with a video game, where there is basically no base for it. James Yukich's movie adaptation of "Double Dragon" ended up looking just like Jankel-Morton's "Super Mario Bros.", where its scenes contain as much style and fun as the other, namely little, except that here the trademark suits of the brothers are even less featured in the story - only in last 5 minutes of the film. Disregarding the fact that the authors cleansed the story from almost all elements of the video game, it is a dynamic, yet too light fun due to its amateurish setting: many scenes are naive and illogical, while some even don't have any point at all, like the dumb idea to turn Bo Abobo into a mutant, but since he was used for only 3 sequences, he just tags along. A few sagacious gags live it up, like when George Hamilton as the TV anchorman tells the viewers to set their clocks for the summer time, so they wouldn't "be surprised in the morning during the curfew", or when Shuko's 'black ghost' takes possession of a dead basketball player who attacks the brothers, so they push a button which makes the wall squash the corpse, but his 'black ghost' just stays standing up straight in his place, yet the movie as a whole is just "heroes running from here to there" and "kicking with someone", though the charming Alyssa Milano is a small highlight.