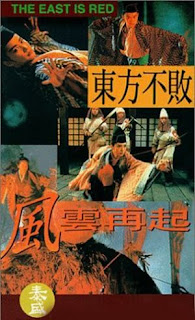 China, 16th Century. Fighter Koo leads Portuguese soldiers to an isolated place where the grave of the mysterious androgynous human Asia is suppose to be. But the grave is fake and Asia kills the soldiers, but spares Koo who begs her to return to the world of humans because it's filled with chaos. Asia discovers that the people are worshiping her the wrong way and that a 'fake Asia' is played by some woman called Snow, so she makes a bloodshed in an act of rage, but hides in a brothel. Koo saves Snow while Asia banishes Portuguese and Japanese conquerors.

Action fantasy "East is Red" (somewhere also translated as "Dung Fong Baai 2" and "Swordsman III") faithfully follows the unusual rhetoric of Hong Kong martial arts film that advocates naive-exaggerated events that border on cliches, which is why during the course of the story unbelievable scenes show up: fighter Koo jumps and in a few seconds climbs up a steep and high hill, upon which a Portuguese soldier asks his friend: "How did he do that?" Not having a better answer, he just replies that it's something not everyone can do. Even later on in the movie a bunch of over-the-top events show up, not without a sly self-ironic wink at the audience (a ship that transforms into a submarine; a ninja hiding behind a painting of a moon placed in front the real moon (!); androgynous Asia riding a giant swordfish) that would otherwise bring a lots of problems to other films, but in this edition it's appropriately exotically esoteric and contains a certain degree of charm, while the real highlight is definitely the ravishing performance by legendary cult actress Brigitte Lin - before she retired just 2 years later - as Asia, a being with both male and female features, which is why the film was especially noticed at various LGBT festivals.