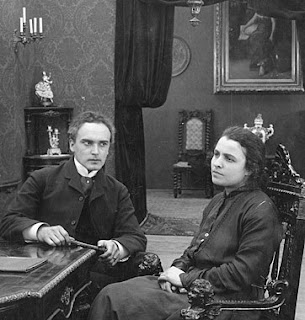 A small Russian town at the Dnieper river, 1905. Hanne-Liebe is a young Jewish girl who has affections towards her friend Sascha, who has joined the revolutionary group. One day, they accidentally spot a young couple making out in the meadow - in fear of the gossip, the couple decides to beat them to the chase and spread the lie that Hanne-Liebe and Sascha were actually intimate. As a consequence, Hanne-Liebe gets expelled from school and her mother tries hastily to get her married. But she leaves for Saint Petersburg to be with her brother Jakow, who converted to Christianity to work as a lawyer. Sascha is also in the town and starts a relationship with Hanne-Liebe, but gets betrayed by the spy Rylowitsch who wants to stop the revolution against the Tzar. Dressed as a monk, Rylowitsch spreads antisemitic hate. The angry mob attacks the Jewish neighborhood and kills Jakow, who came to visit his mother before she died. Yet Sascha saves Hanne-Liebe.

"Love One Another" isn't regarded as highly as Carl Theodor Dreyer's most famous films, "Vampyr" and "The Passion of Jean D'Arc", mostly because it is a conventional, straight-forward crafted movie, yet the director's skill and the relevant topic about antisemitism at the start of the 20th Century still give it flair. Filmed in his early phase, when he was still coping with his profession, and outside his Danish homeland, "Love" is a very good Dreyer film that impresses mostly through the authentic vignettes from Russian life in the early 20th Century, all the actors are great, especially Polina Piekowskaja as the Jewish heroine Hanne-Liebe, yet from today's perspective it seems as if the movie could have dome so much more from it's brave theme of racism and intolerance, but on the other hand it also bravely adds a little subplot about identity crisis.

The most stand-out ingredient in the story is it's above mentioned gritty theme of antisemitism that remained timeless and fresh even today - through small scenes and details, Dreyer shows how unpleasant Hanne-Liebe life was: when she first came to elementary school as a little child, she was the only one in the classroom who didn't know how to make the sign of the cross, which caused an angry backlash from her teacher. That motife is repeated again towards the finale, where a Jewish man gets killed by the angry mob because he also does not know how to make the sign of the cross. Another sharp observation was how antisemitism is just used as a diversion for some other political agenda, since the double agent Rylowitsch spreads lies, hate and nonsense about the Jews, telling how "a law will give Jews half of Russia" or how "they drink Christian blood", just to counterattack the upcoming revolution and keep the Tzar's authority. Still, even though it has a lot to say, Dreyer never falls in the trap of making a dry, colorless message story, but always keeps it alive with good direction and some occasional moment of humor (the mediocre suitor tries to impress Hanne-Liebe by telling: "My name is Joseph...But, the girls in my place all call me 'Handsome Joseph'!").