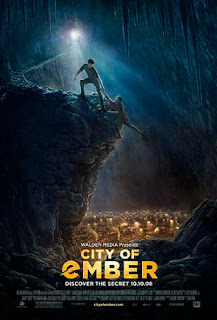 On the day the world ended, the leading scientists built Ember, an underground city where the remaining humans would live. They locked it up for 200 years using a key in a box that eventually got lost. 200 years later, teenage girl Lina Mayfleet and boy Doon get jobs as a messenger and pipe worker and start to wonder, just like other citizens, of the frequent power blackouts. Lina discovers the box in her home but and discovers it shows a plan to get out of Ember to the Earth's surface, yet she and Doon are hunted by the corrupt Mayor and his thugs. Still, they start the mechanism and exit in a boat to the surface, where they witness a Sunrise for the first time, informing also other citizens of Ember.

"City of Ember" is one of the better Hollywood adaptations of books in the 2000's, a surprisingly charged adventure that wonderfully exploits the mystery segment of the story. Director Gil Kenan uses the opulent set design of the underground city from the title as a neat playground for his sharp visual style, while the story is a clever allegory with a hidden philosophical and political subtext revolving around human ignorance and narrow mind that allows them to be perfect slaves for their masters. Already in the exceptional opening where the scientists built the underground Ember after a disaster hit the Earth and placed it's secret in a box that was locked for 200 years, does Kenan show a sense for finesse: in numerous time jumps, it is shown how the box is handed from one Mayor's hands to another, while it's digits are getting reduced more and more - from 200 to 170, 140, 100, 80 years etc. Up until the box gets lost somewhere in a basement, clicks to 0 and opens - but the humans already forgot it's vital meaning and that it even exits. All the tragedy of Ember's citizens is summed up in that short sequence. Kenan also shows a sense for stylization, like in the scene where the Mayor (a serious Bill Murray) runs away from the gathering, but trips and falls on his painting, revealing a stain on his face and a stain on his face on the painting, but the real highlight is the brilliant actress Saoirse Ronan as the heroine Lina, showing all her talent in the scene where she is late and "sneaks" in to her Assignment day. The major flaw is the unnecessary giant mole in two sequences which seems like it came from some trash movie, though the authors still handled it with more taste than some other 'children's movies', while the Plato's allegory of the Cave story has been done already a hundred times before, but the ending is still miraculous.