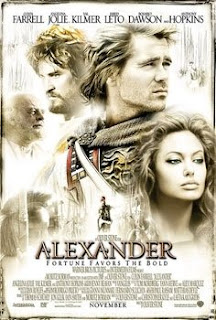 In Alexandria, Aristotle tells historians the story about the life of Alexander the Great (356 BC-323 BC). Alexander grew up in a Macedonian province as the child of King Philip II who was hated by his wife, Queen Olympias. After Philip got murdered, Alexander became the new king and started his conquest of Asia Minor, arriving with his troops up to Egypt's territory where he founded Alexandria. His next conquest was Mesopotamia where he won over Persian King Darius and entered Babylon. He continued to the east where he married an Asian girl even though he had gay interests towards Hephaestion. After his final clash in India, he returned to Babylon, where he died.

After the "Gladiator" won a whole bunch of awards and became a hit, Oliver Stone's dream project "Alexander the Great" got greenlit, a history spectacle that was almost unanimously rejected by critics as "not great", even though, oh what irony, it was not that much worse than "Gladiator". Both films roll in pathos and dry cliches, while they don't have that emotional connection towards their heroes. Stone shows Alexander's life in ellipses because the film would have had to last for over 6 hours in order to do justice to all his moments in life and detailed battles, yet it's still a pity he avoided his adventure in Egypt where he founded Alexandria. The film is all over the place, crammed with weird scenes like the one where he kisses his mother in the mouth up to his gay relationship with Hephaestion, but the only inspiring sequence is the one where, after he was wounded in India, Alexander sees his whole environment in red colors. Stone was never a great director, trapped in political ideologies more than in creativity or inspiration, but it is strange how he was unable to make anything more than a decent, but boring film out of such an exciting story.