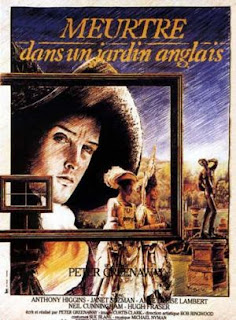 England, 17th Century. Neville is a famous painter who meets Mrs. Herbert at one party who begs him to draw the giant garden of her husband. Neville at first rejects the offer, but later on changes his mind and accepts after she promises she will sleep with him as part of his "salary". Neville decides decides to draw the 12 landscape paintings in 12 days. After the job is done, he leaves but the servants find Mr. Herbert murdered so they decide to decipher hidden messages on the paintings about the planned murder because of an affair. They accuse Neville and kill him.

Peter Greenaway is one of the rare art filmmakers that radiate with freshness and energy, but for some reason he remained relatively lesser known. "The Draughtsman's Contract" isn't on the same level as his genius satire "Drowning by Numbers" since his freshness didn't manage to stay until the end and the overstretched running time and poorly exploited concept about paintings that contain hidden metaphors (like thrown clothes across the estate) and clues about murder because of an affair also don't go to his benefaction. Still, the movie is charming: the camera angles are unusual, the mood is wonderful, satirical jabs are fun (Neville warns he can't draw the sound of a whistle and constantly chases away animals from the estate so that he can finish is painting) whereas a few touches of fantasy are neat, like the scene where the statues in the garden suddenly come to life.