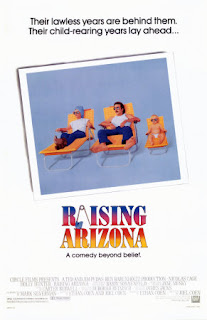 After many years in prison, clumsy robber H.I. McDonnough decides to marry policewoman Edwina. Their marriage would be perfect if there weren't one small problem - Edwina can't have kids. Thus, they kidnap one of the five babies of the wealthy tycoon Nathan Arizona. But the real problem starts when he puts a huge reward money for his baby, and H.I.'s former criminal pals Gale and Evelle take the child from them. Still, in the end, Edwina returns the baby back to Arizona, who shows understanding for the couple.

Bizarre cult comedy "Raising Arizona", the 2nd film of the Coen brothers, didn't manage to overwhelm as much as their first one. Unlike their great minimalistic debut film, which was extremely polished and meticulously crafted, "Arizona" seems chaotic, overstuffed and rather forcefully funny mainstream comedy, with sequences that are individually virtuoso directed, but as a whole don't connect that fluently. Even though the best scenes are the one where Nicolas Cage's character H.I. is running away from the police and the dog, "Arizona" has at least 5 moments with unrestrained humor, skillfully achieved with dialogues, situations and director's procedure. That energetic and stylish satire on adoption will please a lot of the audience, the actors are all great, among them even John Goodman as the bad guy, while the fast pace and clever ideas are to be found everywhere, yet the middle part of the film still seems lousy and too goofy at moments, while the story seems to drag and doesn't have as much spark as other Coen brothers films.